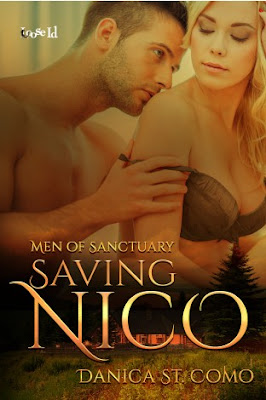 Happy Tuesday, everyone! I'm proud to share a new release from fellow Diva Danica St. Como: Saving Nico, the newest installment in her Men of Sanctuary series. This is Abigail's story--we've met her in previous books, but in Saving Nico, she finally gets her very own HEA.

After Marine scout sniper Niccolo Ferrari lost his best buddy, spotter Pietro “Pete” Galletti, to an Iraqi sniper gunning for the bounty on Nico’s head, he goes solo to avoid any more collateral damage. Though he becomes one of the most dangerous snipers in the Corps, Nico’s harrowing experiences leave him psychologically bruised and battered. He comes to the Sanctuary military training camp to decompress, to regain his confidence—and his humanity.At Sanctuary's front door, he comes face to face with Game Warden Abigail O’Connell; the shock nearly stops his heart. He knows her features like the back of his own hand—she was Pete’s fiancée, the woman in Pete's photos, the woman whom Nico fell for from a distance, who he's lusted after in silence for years.Abigail swore off men, yet she can’t deny the immediate heat, the unwanted sexual attraction to the emotionally damaged Marine. Nico can’t tell her that he’s her dead fiance’s best friend. How can he when the urge to take her to his bed, to slide into her body, to stay there forever, is all consuming? If he tells her, he’ll lose her; if he doesn’t, their growing love is a lie.


And now for an exclusive excerpt, only available here at The Divas of Desire!


He tried, he really tried, but there was no way Nico could sleep, not with the woman who had haunted his wakeful days and sleepless nights for so long lying in the next fucking room. Was she naked? Probably not, since she was in someone else’s house. He wore pajama bottoms for the same reason, instead of sleeping in the raw, which is what he usually did when it was safe to do so. What had she worn to bed? His cock, charged up and aching, tented the black cotton fabric at the thought of her in something sexy. Maybe silky and slinky. Oh fuck, yeah.
He slid his hand down the front of the pajamas, rubbed his shaft, groin rising to meet his grip. Pretending. Pretending she was straddling him, her thighs riding his hips as he rose up into her, that sweet pussy taking him in, transporting them both to paradise. The groan brought him back into focus.
Everything he’d thought, wished, dreamed was wrong on so many levels. Just tell her—tell her and get it over with. But if he told her the truth, he might lose her forever. Lose her? What the hell right do I have to think I can have her in the first place? Shit, talk about being cock blocked. Only he was doing his own blocking.
He recalled Abigail’s dating list. She was obviously looking for something, some sort of action in bed. How could any red-blooded male not seek out her company? Not offer to care for her needs? The men in the area must be eunuchs, or dumber than boxes of rockses,  as he and his brothers would say.
Enough of that. Enough fucking self-torture. Maybe once. Yeah, take her one time, to get her outta my system. That’ll do the trick. Maybe my one chance to have a memory that will need to last a lifetime. He jumped out of bed, padded to the bathroom. He brushed his teeth, did a quick wipe down of everything important, dried off.
Automatically reverting to sniper mode, Nico regulated his breathing and heart rate, did his best to regain control. As his first trainer told him, years past. “Calm, boy, just be calm. Take all the time you need. Wait until you’re ready. If you hurry, you’ll fuck it up.” Of course, the veteran sniper hadn’t been talking about the hot woman in the next bedroom. You never know—perhaps it had been a life lesson.
Stealthily, he opened the door to Abigail’s room. He might have been calm, but his target wasn’t. The distinct sound of a weapon’s slide being racked echoed in the room. He reacted instantly, reached for his own weapon—which he'd left on his nightstand, worried about frightening her. Oh fuck.
“Abby, it’s me. Ferrari.” He stilled, slowed his heart rate again; his hand remained on the doorknob.
“Lost your way, marine?” Her words came out low, sorta growly.
“No, ma’am.”
“Then, what the blazes, Ferrari?” Okay, definitely growly, possibly a touch of attitude thrown in for good measure.
“It’s about your list.” He took a step into the room, his eyes quickly acclimating. In the ambient light coming through the windows and skylights, he watched her lower the handgun. “Y’know, your sex list.”
“Oh, rats and double rats.” Her voice hitched in her throat. “We already discussed it—y’know, the list no other living person was meant to see.”
Another step forward. “You shouldn’t leave wishes laying around, giving a guy ideas.” Inside the room, he could barely see the little white top she wore. The bedclothes were pulled up to her waist, blocking his view of her nether regions.
With a heavy sigh, she placed the gun on the nightstand, but still within easy reach. Okay, she’s not going to shoot me. At least not yet. He took that as a good sign.
“And?”
“And, I thought I should offer my assistance. Kinda help you out.” A step closer to the bed.
“Oh, you did, did you? And what sort of assistance would that be?”
Fuck, she’s not making this easy. I guess it’s put up or shut up time. Nico released the drawstring, eased the pajama pants over his jutting erection without doing damage to himself. He let the garment drop to the floor, kicked it to the side. He stood naked, in all his glory, his fully aroused dick pointing toward her.
“Darlin’, whatever I have is yours.”


Purchase Saving Nico at Loose Id!
Posted by Nona Raines at 6:00 AM