Good morning, everyone! Today my guest is fellow Loose Id author Marie Lark whose new book has just been released. It's a sexy menage tale titled Third Take is the Charm. Welcome, Marie! 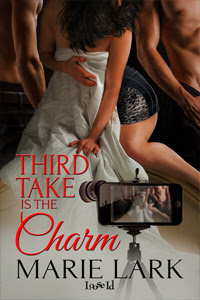 Third Take is the Charm is actually the third book in a series! The first two, Indelible Ink andStripped Down, take place in the same city with characters who appear briefly in this book. And while all three books stand reasonably well on their own, the one thing that ties them all together is the theme of finding ways to make work fulfilling—to be both creative and loving with a partner, be it in a gay, lesbian, or poly romance. (Or straight, presumably, haha. I haven’t gotten there yet.) For Jon and Arthur, that’s tattooing. For Red and Saro, it’s burlesque. And for Melody, Francis, and Denny—the heroes of Third Take—it’s documenting their love story on film.

Love stories, for me, are just as much about real-life issues as they are escapism, so writing Third Take, I wanted to explore the fantasy of three people falling in love with each other, while grounding it in the reality of money trouble, grief over lost loved ones, and other everyday struggles. I find the triumph of the fantasy all the more satisfying and moving when it’s packed with details that I can still relate to in my own life. What bits of realism do you like to see in your fantasies?

Excerpt:
Frankie gestured toward her. “Melody has a job opportunity she’d like to discuss with us.” The gentle skepticism and mockery in his tone were not lost on her, but she didn’t think he meant any offense. It was quite presumptuous of her to approach them when they were so clearly otherwise occupied. “I wanted—I wanted to ask if you’d think about being in a movie that I’m shooting,” she said. “Starring me or him?” Denny asked. His eyes glinted as he slid a glance at Frankie, his obvious competitive streak surprising Melody not even a little. “Ideally, both of you.” “What kind of movie?” Frankie asked. His voice betrayed the beginnings of curiosity. “Well, it’s a—a love story.” Denny wielded his grin like a knife. “Well, we’re in—aren’t we, Franny? “Please, don’t call me that.” He said it as though this was a regular point of contention between them. “You don’t have to commit now,” Melody said quickly. “I thought we could meet over the weekend, maybe?” “How much would you pay?” Denny asked as he cast a quick glance over his shoulder to the man waiting by the car. “Twenty thousand each.” The money was the hook—no point hiding it. She didn’t want it sitting in her bank account, a constant reminder of what she’d lost. Frankie’s eyes widened, and Denny barked a laugh. “You’d pay us forty grand to mess around with some girl.” “Not exactly. I’d pay you forty grand to tell a love story between the two of you.” A frosty silence descended then that Melody had foreseen but was unable to avoid. The rumble of car engines and the sounds of distant laughter from the club parking lot were brittle between them until Melody jumped back in. “Anyway, if you’d like to talk more about the job, here’s my card.” Flipping open the slim brass case, she pulled out two. Frankie took one without hesitation, though his expression was a bit blank as he looked down at it, and Melody suspected he was only being polite. Denny didn’t even bother to take his hands out of his pockets. “I live with him,” he said. “We’ll only need the one, thanks.” He cast a cagey look at Frankie. “I’ll see you back home, yeah?” His voice seemed to bring Frankie out of his daze, and he blinked, straightening to his full height. “Yeah. Be careful.” Denny saluted as he jogged back to the man waiting by the car. As soon as Denny was within arm’s reach, the man grabbed for him and spun him around, kissed him, and pushed him down into the open front passenger door. “Melody Gellar.” She turned at the sound of her name, finding Frankie once again smiling at her. He held up her card. “It’s a nice name. Sounds like the heroine of her own movie.” Melody felt his easy charm wrap around her like another coat. “Thank you. I—I hope you’ll consider my offer.” “We’d be idiots not to.” “Still—” “I’ll give you a call, Melody Gellar.” With a flourish, he pocketed the card. Then he hesitated, took a step closer, and leaned down to speak into her ear. “And my name is actually Francis.” As he straightened, Frankie—Francis—winked at her, like he was pleased to share his name. With a grin, he returned his attention to the woman in the red coat still waiting for him. Not wanting to intrude any further, Melody backed up a few steps and fished in her bag for her car keys. After that first opening gambit, she wanted to be home in her quiet house more than anything. As she crossed the street, she looked back once as the cars behind her pulled away. Both Francis and Denny rode in the passenger seats. Melody didn’t have to ponder too terribly long why Tommy had been hesitant to send her over there. Though it hadn’t been drugs, she suspected a transaction of some kind had taken place. Unlocking her car, Melody decided that might actually work in her favor.
Bio and Links:
Marie Lark is a part-time teacher and rest-of-the-time writer. She lives in New York with her very respectable husband and tiny dog. She writes contemporary New Adult and LGBTQ romance, but loves love stories of all kinds. Romance is like kung fu—it’s in everything. Jackie Chan said that, right?
msmarielark.wordpress.com
twitter.com/MsMarieLark
facebook.com/msmarielark
Posted by Nona Raines at 6:00 AM