It's time again to share with you a book that I read and reviewed just for you!

Contest & Prize details at the bottom, so make sure you read em. 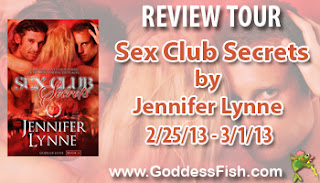 This week we have Sex Club Secrets which is book 3 in the Gods of Love Series by Jennifer Lynn.

Ella is in love with her best friend Kade. But her love has not been returned, and when bisexual Kade shows no signs of becoming romantic toward her, she decides to call a halt on her unrequited love and accept an invitation to a celebrated Melbourne sex club.

Kade is distressed when the woman he is beginning to see as more than a friend decides to visit Secrets before he can tell her how he feels. He follows her into the club and witnesses her at play with the enigmatic Anteros, a sexy god-like man who seems to know exactly how to satisfy her innermost cravings. But Anteros also feeds the hidden desires within Kade. How can he admit his feelings for Ella when he's not sure he can commit with his whole heart?

Anteros is one of the erotes, an aspect of Eros and the ancient Greek god of requited and unrequited love. He has heard the call of these would-be lovers and intends to show them that friendship can sometimes be the best place to kick start a lasting romantic relationship. But love cannot flourish unless it is returned, and how will he convince Kade—a man who occasionally enjoys other men—that he can be true to the woman he loves? What will happen to this couple when the night ends and they return to the real world outside the door of Secrets?

Has one of the gods of love finally taken on a challenge he cannot fulfill?

Excerpt:
"Welcome to Secrets, Ella. We're really glad you decided to join us this evening." Her voice was husky and sensual, and a primitive quiver darted across Ella's skin. Wow.

"Thank you," she answered, her skittering heart lending a slight breathlessness to her own voice. "My, ah, friend decided not to join me this evening, so—"

"That's fine." The woman's mouth curled up at one corner in an expression that was almost sly. "Quite often we find it better if patrons come alone, anyway. Less chance of inhibitions getting in the way. Come through, Ella. There's someone here who's been waiting to meet you…very impatiently, I must say."

Her tone was indulgent. Whoever was waiting was clearly a favored—what had she called it?—patron.

Ella's curiosity grew as the other woman wrapped long, crimson-tipped fingers around her upper arm and drew her further into the venue. Would whoever was waiting to meet her be the one who had sent the invitation? Would it be someone she knew?

The only person for whom she had sexual feelings had been left outside the door of the club seething with displeasure at his vanilla friend daring to try something new. And without his approval, either.

Bad luck, Kade. I'm here tonight for me. No one else. Just me. And my unrequited desires, apparently.

The flip-flop of her stomach sent a wave of warmth spiraling downward and her womb squeezed in nervous anticipation of what might lie ahead. 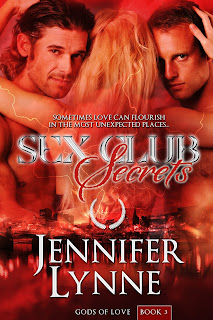 What else can I say about this little story except HOT, HOT, HOT! These three characters come alive on the page, and though the story is a short one, all three have wounds, damage from their pasts they're trying to heal. I would have loved to see more of their backstories in an extended version of this book, but since we get all three POVs through the book, I felt like I knew quite a bit about these characters. There was also this reference toward the beginning of the book that I will not give away but that I thought was so damned clever and funny, I had to give it a full 5 Divas! Definitely worth a read. Go get it! (Buy links are below)

Find Jennifer on the web at

Jennifer will be awarding a $10 Amazon GC plus a Kindle copy of Platinum Passion (GODS OF LOVE 1) and Aphrodite Calling (GODS OF LOVE 2) to a randomly drawn commenter during the tour.

Posted by Rachell Nichole at 3:00 AM